The Biodiversity Research and Teaching Collections’ curatorial and scientific staff  conduct basic research in the fields of systematic biology, biodiversity science, and conservation. While curators, students, and staff in each division have specific research foci (see research pages), many projects bring together personnel from different divisions as collaborators. Graduate students affiliated with the BRTC are an integral part of our future, and conduct their own research as well as assist with general museum tasks. Undergraduate interns and volunteers from the University also contribute to collection maintenance and research. Our Google Scholar profile tracks the use of our specimens and their data in publications by affiliates and others. 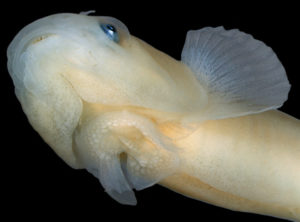 Evolution of the sophisticated clingfish adhesive disc: Dr. Conway, Faculty Curator of Fishes, is investigating the anatomy and phylogenetic relationships of the Gobiesocidae (clingfishes) as part of an ongoing NSF funded collaborative project with Dr. Adam Summers (Uni. Washington, Friday Harbor Labs). Clingfishes have the ability to stick to even heavily fouled and high structured substrates within marine and freshwater environments using a sophisticated adhesive disc that is formed by elements of the paired-fin girdles. Summers and Conway are investigating the diversity of form and function of this disc across the clingfish tree of life. This has provided funding for field work throughout the Caribbean and Australasia, which has resulted in the discovery of several new species. Specimens collected have been deposited at the BRTC.

Recent publications resulting from this work include: 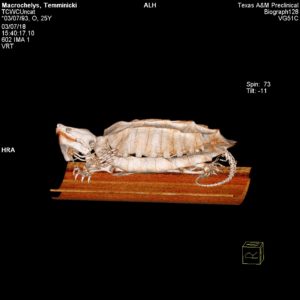 TCN: oVert Open Exploration of Vertebrate Diversity in 3D: Faculty Curator of Fishes, Dr. Conway, Staff Curator Ms. Prestridge are representing the BRTC and Texas A&M University in the NSF supported oVert (openVertebrate) Thematic Collection Network (TCN) which will generate and serve high-resolution digital three-dimensional data for internal anatomy across vertebrate diversity. As the scanning center for large specimens, we will contribute data to the network of digitization centers across the US, which aim to CT-scan >20,000 fluid-preserved specimens representing >80% of the living genera of vertebrates. This will provide broad coverage for exploration and research on all major groups of vertebrates. This collection of digital imagery and three-dimensional volumes will be open for exploration, download, and use to address questions related to the discovery of new species, documenting patterns of anatomical diversity and growth, and testing hypotheses of function and evolution. All data will be hosted by Morphosource and are freely available for educational and research use. Click here to see our exhibit highlighting the utility of CT scanning. 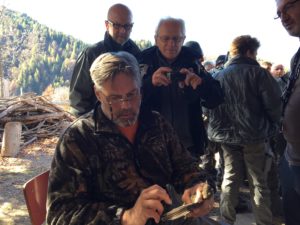 Avian Malaria: Voelker’s lab is investigating the distribution and prevalence of avian malaria across Africa (D.R. Congo, Benin, Malawi and South Africa) and Europe.  In support of this endeavor, Voelker and Prestridge visited Italy with Italian colleagues, taking blood samples from nearly 800 birds.  The first paper stemming from this collaboration was published in 2015.  A paper giving an overview of what we know about avian malaria in Africa has now been published, as has a paper on detection and lineage discovery in different source materials collect in Benin.  Two additional papers are in review.

Recent publications resulting from this work include: